You are here: Home1 / Blog2 / Uncategorized3 / Flying Against The Odds 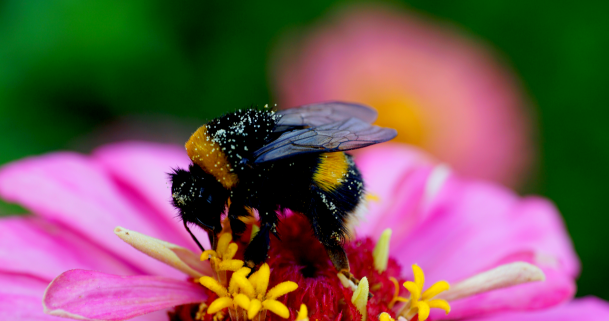 Look to nature and you’ll see a life lesson in the mighty bee.

According to many, there is no reason a bee should be able to fly. Jack Fraser, Master’s Physics, University of Oxford says, “according to all known laws of aviation, there is no way that a bee should be able to fly. Its wings are too small to get its fat little body off the ground. The bee, of course, flies anyways. Because bees don’t care what humans think is impossible.”

But the laws of nature are funny things, and the animal kingdom comes in every shape and form. It turns out that it’s a misconception that the bee isn’t made to fly. It’s just built differently than a bird. So how is it that a bee can fly? Is there a lesson we can take from the bee that shows us how we can also fly, even against seemingly impossible odds?

The Naked Scientists website says, “bumblebees are the tanker trucks of the insect world, evolved to carry huge loads of pollen back to their hive. To figure out exactly how their wings move to propel them through the air, back in 2009 Oxford University scientists put bumblebees in a wind tunnel with some smoke and high-speed cameras. And although the bees clearly do fly, they do it in an unusual way- unlike most flying animals their left and right wings flap independently and the airflow around them never joins up to help them slip through the air more easily. It’s described best as a ‘brute force’ approach to flying, rather than the elegant soaring of a bird or the streamlined flight of a fly.”

So, the bumblebee goes against the grain and is built to be a marvel of aerodynamics and has made people reconsider what flight really means.

The authors go on to say, “So – although they may do it in an unorthodox manner, the flight of the bumblebee doesn’t defy physics. In fact, this myth is often used as a way of being disparaging about science – implying that if something doesn’t fit into our current models or we don’t know how it happens then science is somehow at fault or that there a mystical forces at work. Of course, as this story shows, when something appears to defy the laws of physics, it’s because we haven’t found the right way of studying it.”

Isn’t that also true of careers, life and people? If we aren’t built a certain way, aren’t understood a certain way, then we aren’t relevant, we don’t fit the mold of expectation. We are told what we desire is impossible, that we aren’t made for it, and that while we might want all the wealth possible in our lives, spiritual, emotional, mental, if we accept the rule of others, like accepting the so-called known rules of physics, we will constantly be up against artificial limitations.

What the bee shows us is that there is no limit to flight. That what makes flight possible, in the case of the bee, is a special set of skills and techniques that allow it to gather and spread pollen that makes the world what it is. Without the cunning design of the bee, it could not hover and fly from flower to flower with the same conservation of energy. It has adapted to communicate with others just the same as them, given the same impossible task of pollinating the world with such little wings and a fat body. But it does. And there’s the lesson. You, too, can fly, against the wind, against all odds known to man, to do the special work that they do. The bee is unique in the insect world for all that it gives to mankind and the world at large. Without the bee, we wouldn’t have everything else.

So, just remember the bee when you’re feeling like maybe your wings are too small, they have been clipped, and you’ve been told that you can’t do what you want to do and know you can do. Don’t give up. Just get busy being the best impossible bee you can be.

Do you need help getting your career flying again? Connect with our hiring and recruiting specialists at beprofound@profoundtalent.com

Keep up with interesting videos and articles every week. Become a magazine subscriber.